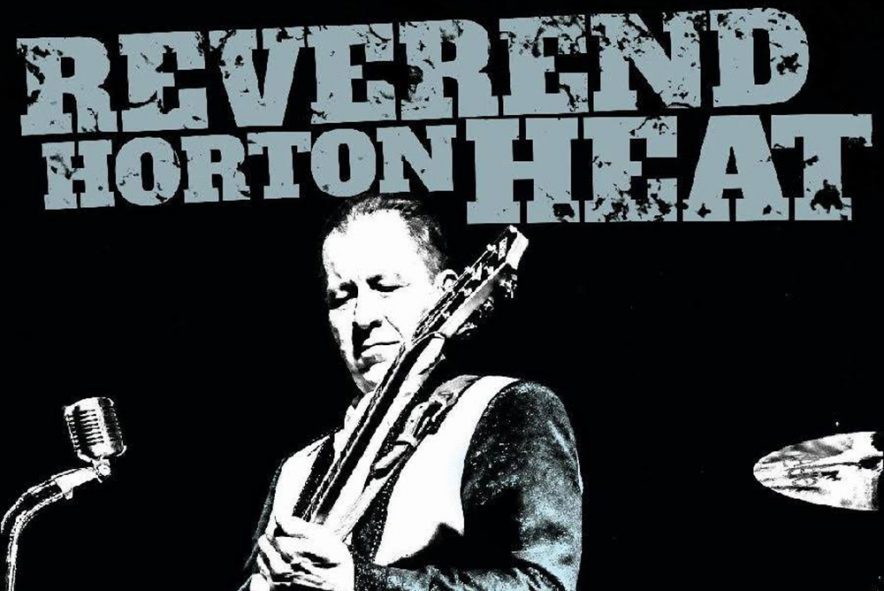 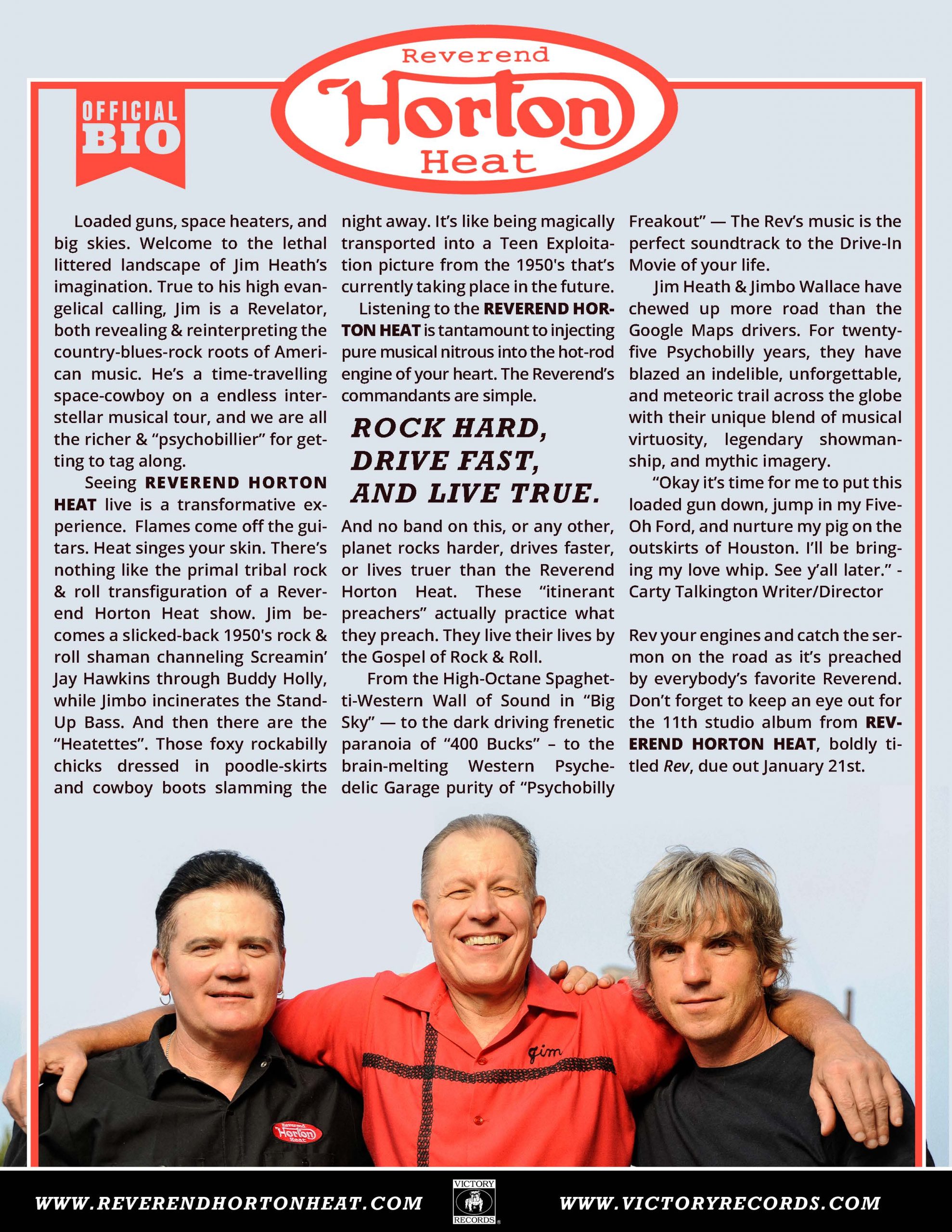 Reverend Horton Heat is the stage name of James C. Heath as well as the name of his Dallas, Texas-based psychobilly trio.  Heath is a singer, songwriter and guitarist.

The group formed in 1986, playing its first gigs in Dallas’ Deep Ellum neighborhood.  The core members are Jim “Reverend Horton” Heath on guitars and lead vocals, and Jimbo Wallace on the upright bass.  The band signed to Victory Records in 2012, and released its 12th studio album, Whole New Life, on November 30, 2018.

Heath was born in Corpus Christi, Texas, where he was raised with an appreciation of rock, electric blues and rockabilly.  He was influenced by country music artists such as Junior Brown, Willie Nelson, and Merle Travis.  He played in local bands until 1985 when he gained notice in Dallas as “Reverend Horton Heat”, the moniker bestowed by the owner of the Deep Ellum neighborhood nightclub where he performed regularly.

Interscope Records joined with Sub Pop to co-release the band’s third album Liquor in the Front (1994). Al Jourgensen of Ministry produced the album.

Scott Churilla replaced Bentley as drummer in the mid-1990s, and the band released It’s Martini Time in 1996.  The album brought the band its first Billboard chart success, reaching number 65 on the Billboard 100.  The band covered the boogie standard “Rock the Joint”, and the song “It’s Martini Time” was a minor hit.  Later that year, Heath brought his street preacher style to the television series Homicide: Life on the Street, and he appeared on The Drew Carey Show in 1997 followed by Conan O’Brien and all the late night shows at that time.

The 2000 album Spend a Night in the Box was released through Time Bomb Recordings, with Paul Leary producing.  The style was a return to straight-ahead rockabilly songs.  The album rose through CMJ’s charts to peak at number 2 in May of 2000.

The song “Like a Rocket” served as the theme for the 2002 Daytona 500 race.  The band featured the song on their next album, Lucky 7.

Victory Records signed Reverend Horton Heat in 2012, and Scott Churilla returned to the band as drummer, playing for the next five years.  An album titled Rev was released on January 21, 2014.  A YouTube video for a single on the album, “Let Me Teach You How to Eat,” preceded the album on November 12, 2013. Rev rose on the Billboard 100, becoming the band’s highest-charting album.  They toured as opening act for Motörhead, and recorded rock and roll songs with Motörhead’s Lemmy Kilmister, though the tapes are unreleased.  Reverend Horton Heat also backed a number of other artists such as Unknown Hinson, Jello Biafra and Deke Dickerson.

In 2017, drummer Churilla was replaced by Arjuna “R.J.” Contreras, formerly of the band Eleven Hundred Springs.  Matt Jordan of West Virginia joined the band playing piano and organ as well as supporting vocals.  They released the album Whole New Life in 2018.  In 2021, Heath and Wallace teamed with drummer Slim Jim Phantom (Stray Cats) to form a side project called The Jimbos.