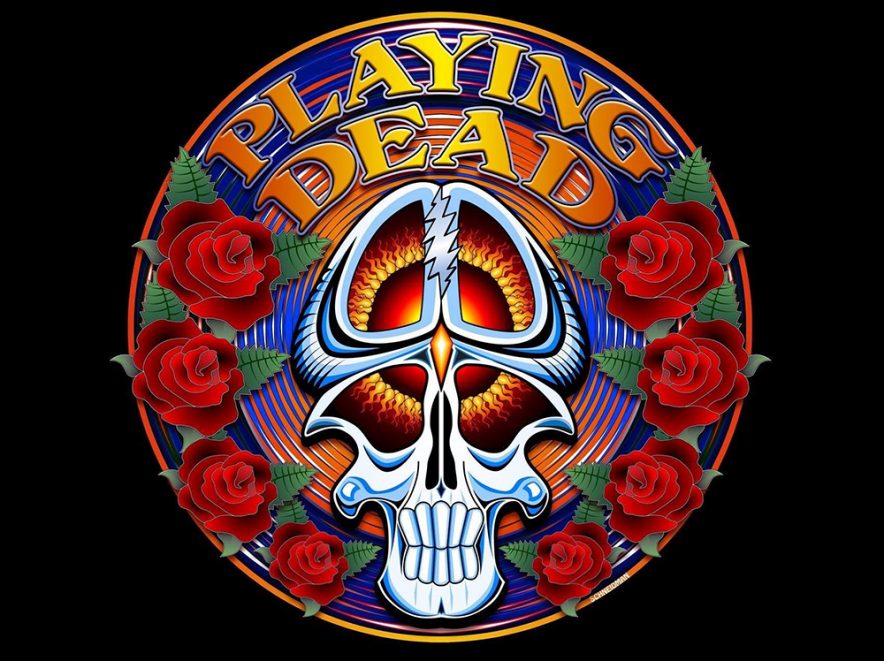 Vic made his debut as Electric Hummus’ keyboard player, then surprised everyone with his guitar playing when Playing Dead was formed, despite playing guitar upside down and backwards.  Vic also was a founding member of Uncle John’s Band in Tampa in 1995, and a mainstay of Rip and The Fatties way back when.  Vic DeRobertis released an album of all original music in 2015 called “Crooked Soul” that is squarely in the roots camp, with tinges of folk, country, alt-country, rock and blues.  His writing features tales of redemption, lost love, nefarious characters and occasional darker musings.  He also specializes in left- handed guitar sales at his site Lefty Guitars Only.

With an uncanny resemblance and vocals that match Bob Weir’s, Jimbo held down the role touring with Dark Star Orchestra in the summer of 2000 before returning to Electric Hummus and then founding Playing Dead.  Jim is originally from Wayland, MA and saw his first Grateful Dead show at The Boston Garden in 1982.  He started a side project a few years ago called “The Two Djimm Acoustic Trio” (with Tony Ryon on bass and Pete Wise on drums) which showcases some of his songwriting, along with a healthy dose of Bob Weir songs and other covers.  Jim also wrote and illustrated his children’s book “Kimo and Kalini; A Hawaiian Mouse Tail”, which is available on Amazon and Barnes & Noble online.

Mark is a keyboardist/singer/songwriter hailing from New York City.  Initially self taught, he went on to study piano with David Frank and T Lavitz (from Dixie Dregs).  Mark saw the Grateful Dead about 75 times between 1980-1995.  Mark joined Playing Dead in 2007 and has fun putting his own spin on the vocals of Pigpen’s material.  His keyboard influences include Chuck Leavell, Brent Mydland, Keith Godchaux, Steve Winwood, Bruce Hornsby, Dr. John, Elton John, and Art Neville.  He is also the keyboardist/vocalist for The Knot (formerly Slipknot!).  Mark has written 20+ original songs, which he performs with The Knot, several of which were released on the all original album “Slip Into Somewhere” in 1997.

The musical journey of Dave (aka Dr. Bass) began when he started piano lessons at the age of 5, with his mother faithfully taking him down to the church every night after school to practice on their piano.  In college, Dave bought a used electric guitar from a friend for $20 and began his work on the stringed instruments.  Dave bought his first bass from a fellow graduate student in 1999, and the rest is history.  Originally self-taught on the bass by playing along to some of his favorite bassists Phil Lesh and Mike Gordon, Dave has since studied under bassist extraordinaire Kai Eckhardt of Garaj Mahal.

Brian brought his drumming prowess to Electric Hummus and Playing Dead as its youngest member, and he’s still hanging in there with the old guys.  He also plays original music in his side project Electro Politics.