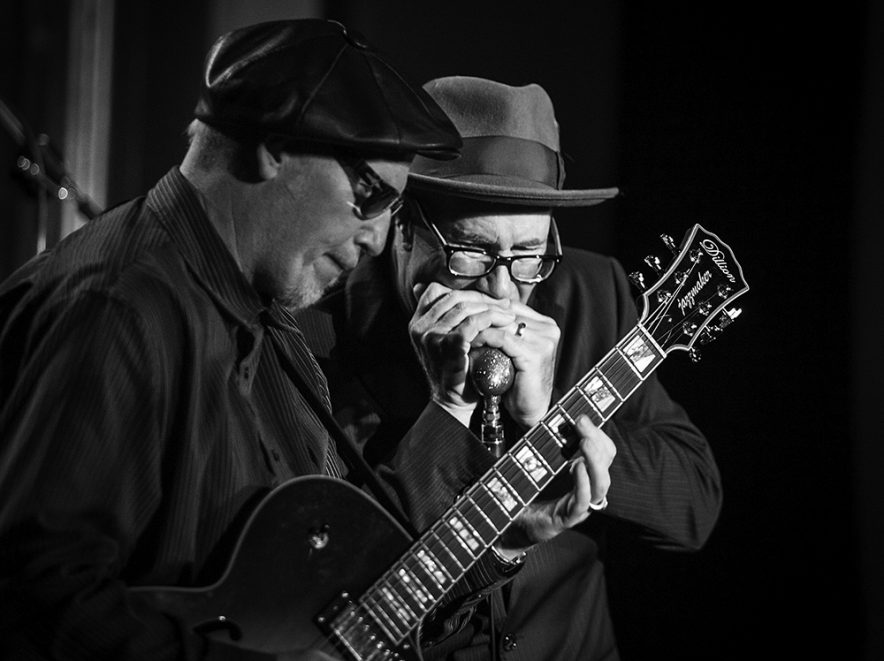 Mark Hummel is nominated as the Best Harmonica Player for the 2019 Blues Music Awards being held in Memphis’ Cook Convention Center on May 10, 2019.  Hummel has a fine new album release called ‘Wayback Machine’, which has received rave reviews.

Mark Hummel’s Blues Harmonica Blowout™ started on a Sunday night in 1991 at Ashkenaz in Berkeley with four harmonica players – Rick Estrin, Dave Earl and Doug Jay.  Each player performed a twenty to thirty minute set and everyone jammed together with Hummel’s Blues Survivors as backup.  Over the next five years it grew to become a multi venue event around California and included bigger names like William Clarke, Norton Buffalo and Paul DeLay.  By 2000 the Blowout was headlining Yoshi’s in Oakland as a four night show with Rod Piazza, Kim Wilson, Rick Estrin, James Harman and Billy Branch.  These shows were recorded for Mountain Top Records.

Time after time, Oakland-based bluesman Rusty Zinn’s raw, burning guitar work and soulful vocals leave listeners open-mouthed in amazement.  That is, until their feet start to move uncontrollably and lead them to the dance floor, as Zinn’s jumping blend of 1940s and 1950s West Coast swing/blues and gritty Chicago blues takes over.  Zinn has electrified audiences around the world with his fiery live shows and critically acclaimed recordings, both as a leader and as a sideman.

Zinn’s raw talent and deep feeling for the blues have earned him gigs and recordings over the past ten years with many blues masters, including Jimmy Rogers, Snooky Pryor, Luther Tucker, James Cotton, Mark Hummel and Kim Wilson (who helped Rusty get his first recording contract and co-produced his first album, Sittin’ & Waitin’ for Black Top Records in 1996). Upon the album’s release, The Memphis Commercial Appeal raved, “Rusty Zinn is the real deal. To say this is the best blues release of the year is an understatement.”