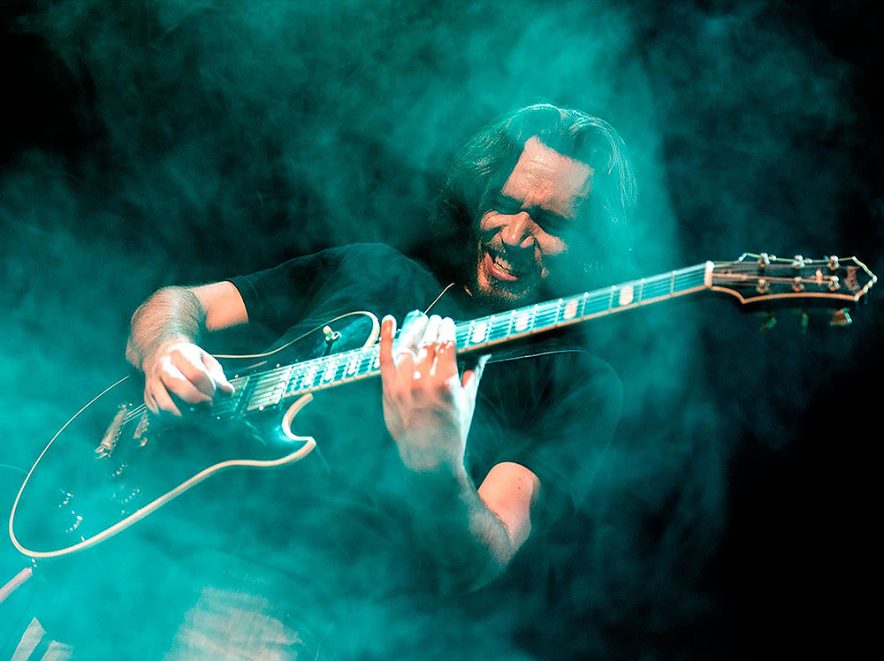 “Road-tested and seasoned from 22 years on stage, Eric Steckel is a blues veteran at only 31 years of age.  His big break came about at the age of 12 when Blues legend John Mayall invited Eric on tour with his band The Bluesbreakers and hired Eric to play lead guitar on his 2005 album.  Since then, Eric has launched a successful solo career releasing 11 albums, developing signature guitars, pickups, & amps and touring in 30 countries.  Eric has shared the stage with Steve Vai, B.B. King, Gregg Allman, Johnny Winter, John Mayall, Ray Charles, Larry Carlton, Robben Ford among others and was named one of “10 Future Blues Stars” by Guitar Player Magazine in 2021.”

In an era where pedalboards, laptops and samples have become commonplace, Eric Steckel goes against the grain and harkens his listeners back to the days when great guitars were played loudly through great amps.  Hailed by many as the top rising star of Blues/Rock, Eric delivers a powerhouse performance that has left audiences in 30 plus countries (and counting) mesmerized.  He brings an energy and passion to the stage that never disappoints and his signature blend of Bluesmetal is a must see for fans of guitar-based rock.

Few young guitarists can improve on Eric Steckel’s impressive resume.  Eric’s debut CD, “A Few Degrees Warmer”, was recorded live in April 2002 when he was just 11 years old.  It wasn’t long until he appeared at the 2003 Sarasota Blues Festival where Eric’s powerful set became the talk of the day.  Before the night was over Eric was introduced by British Blues/Rock legend, John Mayall as the youngest guitarist ever on stage with the Bluesbreakers.  Eric left a lasting impression on Mayall and, in 2004 Mayall invited Eric to appear in Sweden, Norway and Denmark during The Bluesbreakers’ Scandinavian Tour.  In early 2005, Eric traveled to Los Angeles where he joined Mayall for session work on the “Road Dogs” record.

He then spent the following years filled with marquee festival dates and sold out concert tours in Holland, Germany, Belgium and Italy.  He opened for Johnny Winter at The Paradiso in Amsterdam, thrilled audiences at the Tegelen Bluesrock Festival and shared the prime-time bill with Gregg Allman at the legendary Pistoia Blues Festival.

Throughout his teens and young adulthood, Eric released several critically acclaimed live and studio albums. 2006’s “Havana” was a hit among Blues guitar lovers and tracks from this album are still featured often on SiriusXM’s Bluesville station. 2008’s “Feels Like Home” featured the talented Duane Trucks on drums and recalled the 70’s southern rock era.  Hits from this album such as “The Ghetto” and “Just Walk Away” receive regular airplay to this day.  In 2012, after years on the road, Eric entered the studio once again to record a powerful modern Blues record.  “Dismantle The Sun” emerged.  In 2015, Eric embarked on a quest to record a fully transatlantic studio album with some of the finest producers, engineers and musicians he knew.  This led to “Black Gold” being recorded in both Nashville, Tennessee and Amsterdam, Netherlands.

Eric’s 2018 album “Polyphonic Prayer” was the beginning of Eric’s new era of ‘Bluesmetal’ records featuring a more modern guitar sound and production style and featured the hit “Tennessee” and the slow blues classic “It’s My Own Fault” which was immediately added to Spotify’s own “Best of the Blues” playlist and received a half-million streams just days after the album’s release.  2020’s “Grandview Drive” took Eric’s signature ‘Bluesmetal’ sound further into arena rock territory with a bigger mix and production than his previous solo albums. “Grandview Drive” also saw Eric coming into his own as a confident songwriter with radio-friendly tracks and stadium rock hooks, all while maintaining the searing guitar licks and tones that his fans have come to expect from him.