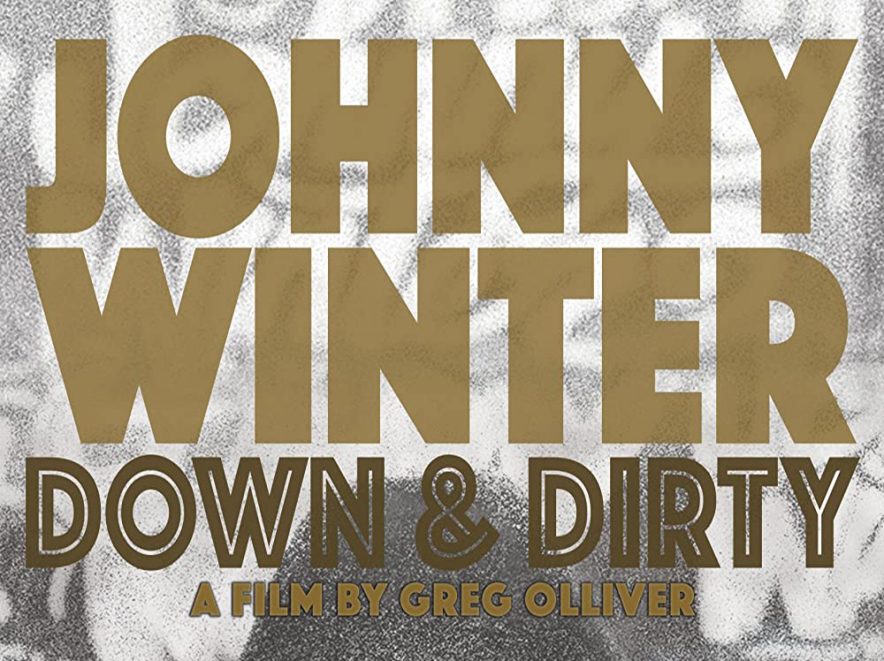 If you are attending the James Montgomery show or just want to see the film, come down and watch Johnny Winter: Down & Dirty on The Music Room’s Theater Screen beginning at 5:00PM.

Johnny Winter “Down & Dirty” Documentary Needs to Be Seen to Be Believed!  ~JD Nash

“I always like stories about people that drink and have drug problems and women problems,” says Johnny in this film. “Its just interesting.”

An addict for most of his life, Johnny Winter took the world by storm in the late 1960s as one of the premier purveyors of electric blues.  Being born an Albino in the East Texas town of Beaumont, he felt a kinship to the African-American blues artists he heard on the radio.  “Just cause you’re a different color, they don’t like it?  You don’t like black people because they’re black?  They didn’t like me because I was too white.”, he explains about his young days with the bullying and fights that came with them.

It was this sentiment, in reverse order, that convinced BB King to let a 17 year old Winter come up on stage with him during a performance at Beaumont’s Raven Club.

This film is chock full of stories just like that told by either Winter himself, or through flashback footage of television interviews with the legends he admired.  King, Muddy Waters, James Cotton and a host of other blues greats share their stories and feelings about the slide guitar slinging phenom.

Rare and sometimes never before seen footage and photographs intermingle with the anecdotes of Winter as the film follows him on a two year world tour.  From France, Hong Kong, New Orleans and his very own hometown, Winter regales the viewer with tales of his successes and failures with no holds barred and no sores not opened.

One of the main focal points is his recovery from addiction with the sole help of his dear friend and band mate, Grammy-winning guitarist Paul Nelson.  The rumors of Winter’s heroin, alcohol and drug addictions are the stuff of legend, however when the truth comes out we learn that he only used heroin for a couple of years.  It was the 35 year methadone addiction that nearly killed him on more than one occasion.

We also get extremely intimate glimpses into other aspects of his personal life, the drugs he used for the better part of five decades; his switch from playing the blues to rock & roll and back again; stories of other famous players he knew personally and more.  A must see film followed by James Montgomery LIVE at The Music Room!