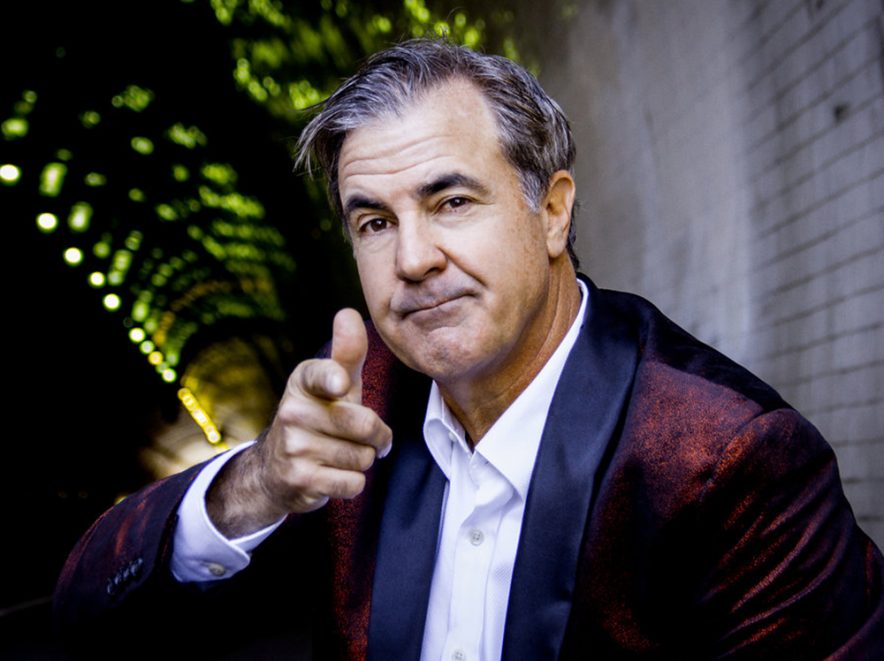 Jackie Flynn has emerged as one of the funniest and most talked about comedians to come out of Boston, joining the ranks of Steven Wright, Denis Leary, Lenny Clarke and Jay Leno, and gracing the stages of the IMPROV, COMEDY STORE, FLAPPERS, LAUGH FACTORY, and other noteworthy venues.  He has parlayed his success as a stand-up to firmly establish himself in the film and television arena, featuring in several episodes of the hit series “The King of Queens,” and recent guest appearances on “Veep” on HBO and the Disney Channel’s “Bizaardvark.”  He is also recognized from his role along side the likes of Burt Reynolds, NFL Coach Jimmy Johnson and Jerome Bettis as one of the “Men Of The Square Table” in the hugely popular Miller Lite “Man Law” commercials.  Jackie is currently seen in the series regular role of “Tony” in “Loudermilk” (DirectTV Audience Channel), which is Peter Farrelly’s directing foray into television.

He is also one of the proud winners of the prestigious San Francisco Comedy Competition, as well as a featured performer at the Montreal Just For Laughs Festival gala.  He was chosen to perform at the U.S. Comedy Arts Festival in Aspen, Colorado produced by HBO.

Early on in his career, Jackie was discovered on stage in Boston by the Farrelly brothers, who have since cast him in back to back roles in “King Pin”, “There’s Something About Mary”, “Me, Myself And Irene” “Shallow Hal” and “Stuck On You.”  Recently, Jackie has had prominent roles in “The Three Stooges,” playing opposite Kevin James in “Here Comes The Boom,” and 2017’s film “Special Unit.”

Jackie is truly a “comic’s comic” whose refreshingly unique brand of sarcastic observational humor puts him in a class all his own, apart from the many derivative cookie cutter comics plying the airways today.  Audiences young and old appreciate his wit and rapid-fire “take no prisoners” delivery.

Tony V started his stand-up comedy career in 1982 after attending several shows at Boston’s prestigious Comedy Connection.  He wandered in one night, quite by accident, looking for a little stress relief from a high pressure job as a case worker at the Somerville Mental Health Center.  Tony was working his way toward a Masters degree in social work having graduated from the University of Massachusetts.  It was not long after that he took to the stage himself.  Tony’s street wise humor tempered with a genuine feel for the human condition quickly propelled him to headliner status on the national comedy club circuit.

In 1986 Tony V was named “Funniest Person in Massachusetts” by Showtime television.  He followed this achievement with several performances on HBO, the Arts and Entertainment Network, Comedy Central and MTV.  From 1987 through 1992 Tony V became the “spokesperson” for American Tourister Luggage.  Remember the suit case smashing gorilla?  It was Tony that gave the ape it’s distinct voice and temperament. Touring extensively in and out of his high tech forty-five thousand dollar yak hair gorilla suit, both Tony and his alter ego had many interesting adventures.  If you get a chance ask Tony about a meeting between The Gorilla, Spuds MacKenzie and Ronald McDonald.

Network television was next on list for this Boston native.  Spending time in New York and LA paid off with multiple highly acclaimed appearances on Late Night With Conan O’Brien, Comedy Central’s Tough Crowd With Colin Quinn and several sit-coms including “Seinfeld”, “Boston Common”, “The Single Guy” and “Dr. Katz Professional Therapist”.  Having proven himself a solid comic actor Tony then tackled dramatic roles on television working with such notable actors as Eric Roberts, Ice T and James McDaniels from “NYPD Blue”.

Tony’s big screen outings include “State and Main”, “Celtic Pride”, “Housesitter”, “One Crazy Summer” and “Shakes the Clown” as well as the independently produced “By the Sea” and “Abracadabra”.  Tony has also produced and written on several shows for network and production companies.

He is no stranger to benefits and fund raisers performing at functions for The American Cancer Society, Children’s Hospital, The Boston Food Bank and many other charitable organizations.  His corporate shows include Citizens Bank, The North East Lumber Association, Stop & Shop, American Express Corp. and Staples.

Along with being a popular headliner at clubs and colleges all over the free world, Tony V has worked with Jay Leno, Dennis Miller, Bobcat Goldthwait, Steven Wright, Adam Sandler and countless other friends and nationally known acts.  Tony has opened for Kenny Rogers, The Temptations, Billy Ray Cyrus, The Beach Boys and Joan Jett.

Jimmy Dunn is an actor and comedian who is most recognized from the CBS sitcom, The McCarthys, where he co-starred as Sean McCarthy.

He got his start in the comedy world performing stand-up at a bar in Gloucester, Massachusetts, where he was paid in beer and fried clams.  Since then, Jimmy has gone one to perform on some of the comedy world’s biggest stages, including Montreal’s Just For Laughs Comedy Festival, The Late Show with David Letterman, Conan O’Brien, and Comics Come Home with Denis Leary.

Boston Sports fans know Jimmy from his many appearances on NESN, (The New England Sports Network).  He was the co-host of Fan Attic, a classic sports highlight show for the Bruins and Red Sox, and wrote and hosted The Traveling Fan segments on the Red Sox Pre-game Show.  He was also the wise-cracking voice of Sox Appeal, the Emmy award winning dating game show that took place inside Boston’s Fenway Park.

When home in New England, Jimmy co-hosts the “Two Boston Guys Whack Up a Pie” podcast with his friend and fellow Boston comedian, Tony V.

Jimmy is also a published author.  He’s written three books, the most recent entitled “Your Kid’s First Poker Book”, considered by many as the best book ever written in the Children’s Self-help Gambling genre.

This spring, Jimmy will guest star on the Netflix hit show, “Love”, as an obnoxious drunken idiot, a role he’s been researching for many years.

Johnny Pizzi has been doing comedy over 30 years.  He has been a fixture not only on the Boston Comedy Scene but all over New England and East Coast as well.  He’s also the unofficial Magician of The New England Patriots.

Johnny has the keen ability to tailor his comedy to any type of crowd.  He’s not only a legendary stand-up comic he is also an amazing magician as well.  He specializes in close-up, stage and mentalism and performs regularly at Foxwoods and Mohegan Sun.

Johnny spearheads a lot of Fundraisers and Comedy Benefits for people in need and has helped to raise millions doing up to 100 benefits a year.   Johnny’s comedy has taken him overseas to entertain our troops in Sarajevo, Kosovo and Bosnia, an experience, he says was one of the highlights of his career.