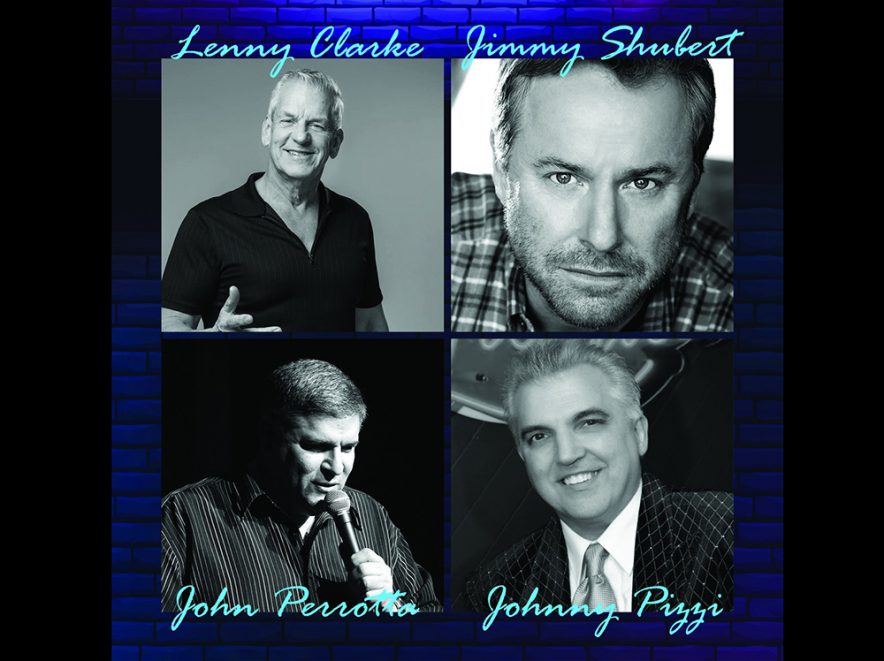 The Music Room is bringing you a legendary night of comedy featuring the hilarious Lenny Clarke, Jimmy Shubert, John Perrotta with host, Johnny Pizzi together on one stage for one night!

LENNY CLARKE needs no introduction, he has appeared in more than 50 movies and television sitcoms.  He is best known as uncle Teddy in Rescue Me with Denis Leary and has had roles in Fever Pitch, Ghostbusters and SMILF.  Lenny was the most famous “saloon comic” in Boston during the 1980s, the heyday of the Boston comedy scene.  The DVD release When Standup Stood Out (2006) details Clarke’s early career and affiliations with other famous Boston comics, such as Steven Wright and Denis Leary, his good friends.  In 1980, Clarke wrote and starred in a local television show Lenny Clarke’s Late Show featuring Wright and Leary, in collaboration with Boston comedy writer Martin Olson.  Clarke and Olson were roommates, and their apartment, known by comedians as “The Barracks”, was a notorious “crash pad” for comics visiting Boston, per the film.

Clarke starred in his own short-lived network sitcom Lenny (1990), and in such TV shows as Contest Searchlight, The Job, The John Larroquette Show and It’s All Relative and movies like Monument Ave., Fever Pitch and Southie. From 2004 to 2011, Clarke appeared in the recurring role of Uncle Teddy on the FX comedy drama Rescue Me.  Now, more than 50 films later and having traveled the world over with his comedy, his latest film-release with a supporting role, last years’ Halloween Kills was a “monster” smash-hit and the newest film in the franchise with Jamie Lee Curtis.

JIMMY SHUBERT has built an impressive resume as an actor, both in film and on television.  As a comedian, he is one of the busiest comedians working today.  After becoming a finalist on NBC’s Last Comic Standing and, being seen on Comedy Central as the closing act on Dave Atell’s Comedy Underground.  He also just wrapped post- production on his brand new hour special entitled Zero Tolerance – soon to be seen on a premium cable network (to be announced soon).  From headlining A-list comedy clubs, casinos, theaters across the country, Shubert’s New-hour special Zero Tolerance is a theatrical presentation of Shubert’s stand-up persona of a blue collar working man’s man.  He combines the outlook of a modern-day Archie Bunker with an utterly real world sensibility to create signature pieces of comedy, on Therapy cats, Smart Phones, Male grooming and, the dumbing down of America.  Shubert loves playing the part of a pop culture Iconoclast.

In television, Shubert is also known for his recurring role on King of Queens for five years and several appearances on Entourage.  Jimmy has a wide range as an actor and has played everything from a prison guard in a hostage crisis to a murder victim on Monk.  He’s worked with such marquee names as Brad Pitt, Angelina Jolie, Charlize Theron, Katie Holmes, Kevin James, James Caan and the late Robin Williams.  On the small screen, He recently did a guest star on IFC’s Maron ABC’s Back in the game with James Caan, on the CBS comedy 2 Broke Girls, He played Betty Whites neighbor.  He appeared on Disney’s hit show Zeke and Luther as Bobby Dicey – World’s Greatest Daredevil, and Barely Legal a pilot presentation about a dysfunctional family law firm, other TV credits include Heist, The Loop,  ER, Reno 911, Rude Awakenings, Angel, Lucky, New Car Smell, Sonny with a chance and Youth In Revolt.  It was Jimmy’s performance as the lollipop-sucking strip club bouncer Vic jr. in Columbia Pictures’ Go, directed by Doug Liman, that jumpstarted his film career.  He then starred in a short film, Velocity Rules, for producer Brett Ratner and director Patty Jenkins (Monster & Wonder Woman).  He has since landed roles in numerous films such as Jerry Bruckheimer’s Coyote Ugly, Fox Searchlight Pictures’ One Hour Photo, The Italian Job, and Mr. and Mrs. Smith.  He starred in a short film entitled Wedding Jimmy, and a feature entitled Tales from the Crib, it is currently making the rounds on the festival circuit soon to be theatrically released.

Jimmy recorded his first half-hour special for Comedy Central Presents at the Hudson Theater in New York City, which received rave reviews from critics and a standing ovation from the discerning New York audience.  In addition, he has released three comedy albums, Animal Instincts, Pandemonium & Alive & Kickin’, which were produced by Grammy-winning producer Dan Schlissel and Stand Up Records. A veteran of live performance, Jimmy has performed all over the United States twice, China, Honk Kong, Singapore, Canada, Ireland, Mexico, Korea and, he along with Drew Carey, performed for the troops in the Middle East and Afghanistan as part of the “America Supports You” program for the Defense Department and Armed Forces Entertainment.  Jimmy took an interest in Magic at 9 years old and by the age of 15, Jimmy he had become an accomplished professional magician.  He later channeled that energy into stand-up comedy.  His unique ability to see the humor in social trends and deliver his poignant and hilarious point of view on world issues has made Shubert one of the most respected, sought-after and original comedians working today.

JOHN PERROTTA started to perform at open mic nights throughout New England back in the early 90’s, such clubs as Periwinkles, Catch A Rising Star, Nick’s Comedy Stop, Stitches Comedy Club, and the Comedy Connection.  He worked with such comics as Bill Burr, Bob Marley, Tom Cotter, and others.  John and Rockin’ Joe Hebert started The Comedy Factory, a traveling comedy club.  He put together comedy shows at restaurants, clubs, and parties throughout New England and came in 2nd to Eddie Galvin in The Funniest Comic in RI Comedy Competition.  In 1992 he made the top 10 in the Tonight Show Comedy Challenge Competition.

John continued to have much success producing comedy shows as the years went on.  In 2017, John had the fortune of performing with national headliner Tammy Pescatelli.  In August of 2017, Tammy asked John to be a part of her Italian-themed show at the Friar’s Club in New York City.  In August of that year, John closed Tammy’s performance at the prestigious Friar’s Club.  Now, entering his 30th year of both performing stand-up comedy & organizing comedy shows, he continues with an incredible passion for his craft!

JOHNNY PIZZI has been doing comedy over 30 years. He has been a fixture not only on the Boston Comedy Scene but all over New England and East Coast as well. He’s also the unofficial Magician of The New England Patriots.  Johnny has the keen ability to tailor his comedy to ANY type of crowd.